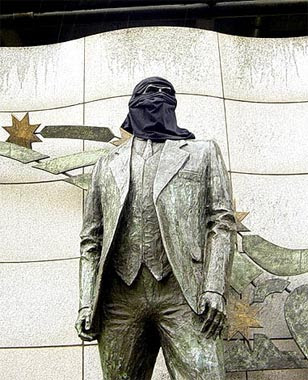 So finally socialists don’t have to try and break through the propaganda barrier which is placed in front of the discussion on how we run our economic system in this country. The propaganda barrier has been steam rolled in to the ground by the current crisis and now we are left with only the facts for the people to take their opinions from. This propaganda barrier was placed there by the ruling class of this country in order to try and limit any debate around the free market system which Fianna Fail embraced when we gained independence. It is this free market system which keeps the profits of the super rich safe and they will do anything to protect that system from being subjected to alternative opinions and ideas.

The propaganda barrier basically means the suppression of socialist ideas through lies and ridicule. Standing on top of their money mountain with economic prosperity, rising employment and a prosperous business sector propping them up, they were in a safe position to ridicule the ideas of socialism. From this privileged position, which a healthy economy gave them, they found it easier to, for instance, denounce the Russian revolution as a complete failure (even though that socialist revolution brought the economy of Russia from a third world position into a first world).They also found it easier to completely ignore the ideas of the poor third world country which was able to afford all of its citizens the right to a house because it used the socialist idea of a planned economy as apposed to the free market. This third world country is Cuba, a country which also has one of the best health systems in the world. Can you imagine a third world country which embraced the free market system, of which there are many in Africa, being able to afford all of its citizens a home and to have possibly the best health system in the world? Not likely.

There are many plain facts like these which have been easier to hide while our politicians where standing on top of this money mountain. But there has been a landslide and the free market politicians find themselves on the same level as us. And as we look them in the eyes we notice a look of guilt, the look from a person who has been up to no good. While they were out of view up on that money mountain they were up to all sorts, we couldn’t touch them. But now that their politically privileged position is gone from under their feet they have to deal with the workers of Ireland honestly, without the protection from the barrier of lies. What they held dear has crumbled around them, what excuses have they now to defend their greedy free market economy?

Socialists have always had facts to back up their claim that there is a better way to organise society and our economic system but before this crisis we had to spend most of our time trying to smash down the lies and half-truths which the ruling class placed in front of our facts. Anytime we made the argument that a better way does exist we were pointed towards the Celtic tiger and the rising employment in Modern Ireland. Why fix something that wasn’t broken they said, and from this argument they debased our position and swept it under the carpet. But unfortunately for them, the faults of their own position has made it impossible for them to debase any alternative opinion with the confidence they once did and they are faced with debating this issue armed with only the facts of both opinions.

However, the workers of the country are keener to hear alternative opinions and it is the job of the Irish left to put it to them clearly. The crisis in the left since Stalinism and the collapse of that system has been a propaganda crisis, a crisis between the battle of ideas. Stalinism and the fall of it was a propaganda nightmare. Free market politicians could point to the short comings of the Stalinist system while it was intact and also point to the fact that it did collapsed when debating with the left. The economic crisis that is happening right now gives us a platform from which to direct a new campaign of the battle of ideas. This is a battle which has crippled the left and one which is vital if we are to win support for a planned economy and a socialist revolution.

Working class parties in Ireland are today seen by the workers as merely pro-worker. The nationalising of the banks is a policy which I believe would have great popularity within the workers if it was relayed to them factually. But they very rarely hear of this policy directly from the workers parties. All they see from the workers parties is when they are at protest demonstrations giving out about this or that. Or when they are dealing with them in local issues. It’s just not good enough to say we are against such and such, we must offer an alternative. And although I know we do to a degree, my argument is that we are not doing it loud enough.

The workers parties put too much time and money into building their own party structure and creating posters to protest the latest imperialist war. The left in Ireland mustn’t take the working class seriously if they are more concerned with the strength of their own party than the strength of the organised working class. The strength of the working class is measured by its social consciousness and that consciousness rises when you make them aware of the social consequences of the anti-bin tax campaign or the organisation of workers into unions. It might sound like a trivial thing, but it seems to me that somewhere along the way the Irish left has forgot to tell the workers what our ultimate aims are.

It’s nothing to be ashamed of after all. We are the real democrats.. If our position was explained clearly to the workers you wouldn’t get much laughter from them. When was the last time the left had a national campaign for a planned economy? The only mention of it is hidden away on the small websites of the various small parties of the Irish left. If you don’t read these websites you won’t have heard of it, except from the mouth of a free market propagandist maybe. There are “public” meetings organised by certain left parties which celebrate Marxist ideas but the only member of the public who goes anywhere near these meetings is the man who has the keys to the front door of the hall. The public are in the dark when it comes to the alternatives to the free market. Even during this capitalist crisis I have not once read or heard of any section of the left dealing with anything but a singular piece of the pie. They seem very able to talk radical in relation to the privatisation of health but fail to open up the debate to take in the whole pie and discuss the need for a nationally planned economy. A nationalised health service is after all useless when not a part of the bigger picture that is a socialist planned economy.

It is odd that the Marxists of this country are failing to debate with the public in a Marxian dialectical way, a way that understands things to be interrelated and ever changing. Irish Marxists use the thought process of the conservatives (formal logic) when trying to convince the workers of a radical idea. The formal logic way of thinking is the polar extreme to the Marxian dialectical way of thinking and analysing society. They are basically using the conservative method of understanding the world to direct their radical opinions to the workers. Every time a Marxist is interviewed and discusses a social problem without using the dialectical way of thinking, without understanding and explaining that all things are related and ever changing and not static or isolated as the ruling class would have you believe they fail in representing the Socialist point of view.

This is our failure, we are not going to the workers as Marxists but as “lefties”. The “left”, or the reformists seem to be embracing conservative tactics and ways of thinking in their dealings with the public so it is up to the revolutionary Marxists to take the lead and stand up for the planned economy. We must use the same method that enabled us to understand society from a Marxist position when we are in discourse with the workers. We can’t use conservative thought processes to explain a revolutionary position. We have to be honest in our understanding of society and explain this clearly to the workers. We must look to be inspired from the behavour of Marxist giants like James Connolly. Who once upon a time stood on podiums in the middle of streets full of people, most of them hostile to his ideas,declaring loud and proud that he stood for working class revolution. Connolly's idea for a planned economy has been silenced through black propaganda from the ruling class and through our own failings. It's time to stick our heads above the parapet and unmask our revolutionary ideas.
Posted by Jay Rothermel at 8:17 PM