Sawant, elections, and the road to workers power

My hiatus from political blogging will probably continue for some time.

But this excellent exposition by my old party, the SWP, cannot go unmarked.  It encapsulates an analysis of the current situation very well.

BY JOHN STUDER
A number of newspapers and online publications of various middle-class radicals and socialists on the U.S. left have extolled the recent electoral wins by Kshama Sawant, Socialist Alternative candidate for Seattle City Council, and two dozen City Councilors in Lorain County, Ohio, who ran on a ticket under the auspices of the local union federation. For some, the election of left Democrat Bill de Blasio as mayor of New York is included.

The question is, do any of these electoral victories represent an advance for the working class and its allies? Do they strengthen workers capacity to fight the bosses? Do they further the self-confidence, class consciousness and organization of labor? Do they move toward independent working-class political action?

In the absence of working-class struggles strong enough to transform our labor unions and lay the basis for a social movement that can challenge the bosses political power, the answer is no. Without this, and lacking a revolutionary program, these elections only nurture workers’ illusions in democratic forms of capitalist rule and provide them with left cover.

Kshama Sawant, an economics professor, ran for the nonpartisan Seattle City Council position No. 2, winning with 50.67 percent in a two-candidate race, with no Republican running. With a “practical” focus on getting elected, she campaigned around three central demands: “$15-an-hour minimum wage, a rent control ordinance to make housing affordable, and a tax on millionaires to fund transit, education and other public services.”

Sawant’s campaign flyers bore the headline “Make Seattle affordable for all” and featured an endorsement calling her a “rarity — a progressive candidate who is principled, articulate, competent, smart, and fearless.” She presented herself as an “activist,” highlighting her involvement in the Occupy Wall Street movement. She said she was speaking for the 99 percent against the 1 percent, running “so that working people finally have real representation.”

Constrained to the narrow boundaries that typify capitalist election contests for local offices, her literature avoided important political issues that affect all workers, such as high unemployment and a woman’s right to choose abortion. It made no mention of key international issues, Syria, the place of the Cuban Revolution, the common interests of working people worldwide against the bosses or the global crisis of capitalism that is driving their attacks against us.

“Sawant pushed the discussion in all races to the left — just as the Tea Party has pushed rightward elsewhere,” noted the Freedom Socialist Party.

The observation is accurate. In a similar fashion, de Blasio’s campaign helped carve out space for a growing socialist wing of the Democratic Party.

But a shift in bourgeois electoral politics to the left does nothing to advance political action on the part of the working class — which takes place in the streets, not at the ballot box. Electoral politics is not the arena for the working class — it’s the arena for the bosses and the labor officialdom. Getting workers to orient in that direction is the employing classes’ strongest weapon.

A major aspect of liberal and bourgeois-socialist politics is geared toward promoting the notion that the capitalist government can play a benevolent role with the right people in office pushing the right policies — a perspective that fosters attitudes of dependency.

Some middle-class socialist groups have in recent years pulled back from running for office themselves, burned out from previous exertions that didn’t produce the quick gains they were looking for. In 2013, the Freedom Socialist Party did not run in Seattle, their base. The Party for Socialism and Liberation did not run for mayor in New York.

Today, a number of the same socialist groups are united in pointing to elections as a key arena where workers and “activists” should focus attention. “On election night Sawant’s supporters, including this writer, gathered to watch returns,” the FSP’s Linda Averill wrote. There were “socialists of all stripes: independents, the FSP, SA, and International Socialist Organization (ISO). In the electoral arena, such collaboration is historic in recent times.”

This attempt to reap gains through a “practical” electoral focus is an attempt to look to something other than real politics — the actions of the working class and the hard road of struggle ahead. These groups, with their attraction to Occupy, no longer look to the working class as the engine of revolutionary change. They lack confidence that through experiences in class combat working people will forge a leadership of their own, gain political clarity and transform themselves into the kind of men and women capable of fighting to end the dictatorship of capital and replace it, from the ground up, with the political power of the toiling majority.

The electoral farce, in contrast, drags workers deeper into the trap of seeing their involvement in politics as a matter of choosing among a list of candidates who they hope will make things better for them.

Much of the left acts on the conviction that the heterogeneous and diffuse Occupy protests, which began and peaked in 2011, represented the growth of a new social movement for progressive change. The idea led to disillusionment in face of Occupy’s inevitable evaporation and cooption by the left of the Democratic Party. But today such hopes have been rekindled in growing excitement about new possibilities in electoral politics.

“It has been said that what happened in Seattle was that Occupy went to the polls,” Jason Netek wrote in the ISO’s Socialist Worker.

“Working people and the poor and all those fighting oppression need to start running pro-worker, anti-corporate independent candidates as part of forming a new, genuine party of the left, which will represent the interests of the 99%,” Socialist Alternative wrote.

In some cases this perspective has been marked by critical attraction to the de Blasio campaign. “He talked explicitly about the vast inequality between rich and poor in the city,” Socialist Alternative said. “In a distorted way, he has articulated the anger of the working class against Bloomberg and the rich elite.”

The ticket was launched in response to an effort to break city unions by Democratic Mayor Chase Ritenauer and a number of incumbent Democrat city councilors. Its purpose was to mount left pressure on the Democratic Party. “Running independent wasn’t our first choice, but hopefully this can help bring the Democratic leaders to their senses,” Bostick quotes Machinist Art Thomas as saying. The meeting of the Lorain Central Labor Council after the election voted to buy a table at the upcoming Democratic Party dinner and to donate to the campaign of Matt Lundy, the party’s candidate for county commissioner.

What made possible the elections of Sawant and the Lorain labor ticket was a shift in workers’ thinking today under the impact of the bosses’ drive to foist the crisis of capitalism on our backs. What workers need is a clear class explanation of the roots of the crisis in the dictatorship of capital and a discussion on how to build a movement to overthrow it.

To advance this discussion, The Socialist Workers Party selectively runs candidates in U.S. elections today, with a focus on the highest offices to better engage in a discussion on the biggest political questions facing workers and their allies.

The party uses its election campaigns as a subordinate component of broader propaganda work, taking the Militant newspaper door to door in working-class neighborhoods in cities and rural areas. It uses them with a cold eye to the fact that the central political prop of the capitalist rulers is the idea that their ballot box gives us a choice in how we are ruled.

In a time of rising class struggle, one expression of independent labor action that could arise would be a labor party based in the street battles and combat organizations of the working class. Its purpose would be to mobilize the broadest involvement of workers and their allies in the struggles of the day, seeking to forge solidarity among combatants and advance the fight for workers’ power.

It would not be an electoral party whose goal was to hold posts in the capitalist government. History is full of such examples that in the end served to buttress capitalist rule.

The mighty revolutions of our epoch — in Russia in 1917 and Cuba in 1959 — weren’t won through elections, but by the actions of millions in the streets. 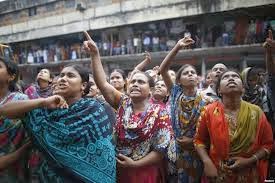 Posted by Jay Rothermel at 8:45 AM No comments: