Reading notes: The Challenge of the Left Opposition (1923–25) By Leon Trotsky

FIRST LETTER TO THE CENTRAL COMMITTEE

NOTE: In the autumn of 1923 the economic crisis reached a peak, with the "scissors"-the disparity between high industrial prices and low agricultural prices-opening to their widest point in early October. Seeking to force industry to lower prices, the government withheld credit from the nationalized enterprises. The immediate result was widespread unemployment and desperation in the cities and, in August and September, a massive strike wave, with the participation of members of two ultra-leftist groups of party members, the Workers' Group and the Workers' Truth…. repressive measures against party members involved in the strikes. …. had recently reorganized the GPU; at issue was whether it would be granted the authority to intervene in the party itself against party members who opposed the line of the leadership.

…. opposed the actions taken by the Central Committee, which amounted to organizational measures designed to intimidate the voices of discontent in the party ranks while refusing to take any steps to eliminate the cause of their discontent….

….The very fact that there arose a need for such a resolution is a highly alarming symptom, along with others no less clear."

…. there exist such moods in the party as to permit comrades who know about such groupings to refrain from informing the party organizations about them.

…. by no means the worst….  seen the intensified application of the techniques and methods used to organize the Twelfth Congress; and within the party this has resulted in the formation of openly hostile and embittered groupings as well as the presence of numerous elements who know about the danger these groups represent but do not report it. . . .

…. two reasons for the marked deterioration of the situation inside the party: (a) the fundamentally improper and unhealthy regime within the party; and (b) the dissatisfaction of the workers and peasants with the grave economic situation that has come about not only as a result of objective difficulties but also because of obvious radical mistakes in economic policy.

…. dangerous it would be if our economic task were presented to the Twelfth Congress in an abstract and agitational manner when the task was to call for 'a tum in the party's attention and resolve' toward concrete vital undertakings designed to lower the prime cost of state-produced goods."

…. most important economic questions are being decided

by the Politburo in a hasty manner with no preliminary preparation and with no reference to an overall plan. . . . "

…. "There is no economic leadership. The chaos comes from the top."

…. "autarchic character of our fiscal policy, i.e., it is not subordinated to the general economic plan." And further: "This is best exemplified by the fact that the disparity between industrial and agricultural prices, which has increased at an enormous rate, is tantamount to the liquidation of the New Economic Policy because for the peasants-the basis of the NEP-it makes no difference why they cannot buy anything, whether it is because private trade has been banned by decree or because two boxes of matches cost as much as a pood [36 pounds] of grain."

…. party organizations, which are supposed to guide the economic agencies by instilling in them a higher degree of conscientiousness, precision, economy, and sense of responsibility, were in fact disorienting them by resorting to a most crude and profligate method of cheating the country….

….Only someone who totally failed to understand the meaning of correct economic management and a feeling of responsibility would look the other way when faced with this kind of 'economic leadership'. ... "  …. mechanically lower prices in response to political pressures in most cases only enriches the middleman….policy that ignores the importance of planned and manipulative adjustment is driven by the force of its own inevitable consequences into attempts to command price in the style of war communism….

….single tax, burdensome mainly because it doesn't conform to the existing economic relations….  smychka is working in reverse: from the peasantry-through the working class-to the party. ….heart of the sharp conflict…. the congress, Trotsky states, is to be found in the attitudes toward the central problem: the rationalization of state industry and the closing of the scissors.

…. When decisions on appointments, dismissals, and transfers are made, members of the party are evaluated, above all, from the point of view of how much they may support or hinder the maintenance of the regime within the party, which, secretly and unofficially but all the more effectively, is being realized through the Orgburo and the Secretariat of the Central Committee….

"Even during the harshest days of war communism, the system of appointment within the party was not practiced on one tenth the scale it is now. The practice of appointing secretaries of province committees is now the rule…. independent of the local organizations. In the event that opposition, criticism, or protests occur, the secretary, with the help of the center, can simply have the opponent transferred…. Organized from the top down, the secretarial apparatus has, in an increasingly autonomous fashion, been gathering 'all the strings into its own hands." ….special party secretary psychology has been created, the main feature of which is the conviction that the secretary is capable of deciding any and all questions without being familiar with the substance of the matters involved….  it dissipates and kills any feeling of responsibility.

…. tight hold that characterized the period of war communism should yield to a livelier and broader party responsibility…. regime which had essentially taken shape even before the Twelfth Congress and which, after it, was fully consolidated and given finished form, is much farther removed from workers' democracy than was the regime during the fiercest periods of war communism….  Even in the cruelest hours of the civil war we argued in the party organizations, and in the press as well, over such issues as the recruitment of specialists, partisan forces versus a regular army, discipline, etc.; while now there is not a trace of such an open exchange of opinions on questions that are really troubling the party…. discontent is not being alleviated through an open exchange of opinions in party meetings or by mass influence on the party organizations(in the election of party committees, secretaries, etc.), but rather it continues to build up in secret and, in time, leads to internal abscesses."

….Politburo's attempt to draw up a budget based on the sale of vodka, i.e., to make the revenue of the workers' government independent of success or failure in economic construction, was an ominous symptom. ….a savage blow not only to our economic work but to the party itself…. There is without question an inner connection between the separate and self-contained character of the secretarial organization-more and more independent of the party-and the tendency toward setting up a budget as independent as possible of the success or failure of the party's collective work of construction. The attempt to depict any negative attitude toward the legalization of vodkas virtually a crime against the party and the removal from the central organ's editorial board of a comrade who demanded freedom of discussion on this disastrous plan will remain forever one of the most disgraceful moments in the party's history."

….danger that the party may be caught unawares by a crisis of exceptional severity; and in that case any comrade who saw the danger but failed to openly call it by name could be rightly accused by the party of placing form above content. 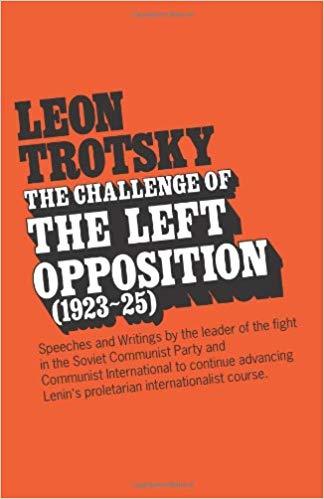 Posted by Jay Rothermel at 1:01 PM

Labels: Challenge of the Left Opposition 1923-25