Our repealed prediction that Henry Wallace and

his new party would buckle and retreat under fire is being fulfilled even more quickly than we had expected. Wallace and his lieutenants are backing scores of candidates of the corrupt Democratic Party that "Boomerang Hank" has been denouncing from coast to coast.

On Sept. 30—four weeks before the election—C. B. Baldwin, Wallace's campaign manager, demonstratively announced that the so-called Progressive Party is withdrawing candidates or withholding opposition in more than twenty key Congressional and Senatorial contests to aid "liberal" Truman Democrats.

Just how frantically the Wallace party is trying to cling to the Democratic coat-tails is shown by the further fact, as Baldwin emphasized, that the Wallaceites are supporting not less than 41 of the 47 incumbents of Congress who scored 75% or better on the pro-Truman CIO voting chart.

That this withdrawal of Wallace candidates is intended to strengthen the decrepit Democratic Party at some of its weakest points was likewise made clear by Baldwin. He pointed out that Wallace party backing is now going to 25 of the 35 Democratic incumbents who were elected by less than 55% of the vote in 1946.

Baldwin asserted further that the Wallace forces would have publicly endorsed even more Democrats "if it were not for the pressure and threats of withdrawal of financial support exerted on many Democrats if they accepted our endorsement."

This whole move comes as a cynical violation of Wallace's earlier campaign assurances that he was building a genuinely independent and progressive party against the two old-line capitalist parlies.

We can imagine the feelings of hundreds of thousands of sincere Wallace supporters at this latest announcement. They have been giving of their time, energy and money in the belief they were helping to build a truly independent party. Now they find their leaders supporting the same bi-partisan politicians who are betraying the American people.

Not a single one of these Wallace-supported "liberal" Democrats even fulfills Wallace's own repeated definition of a liberal. The first criterion, according to Wallace, is that they shall be "for peace" and oppose the Truman-Marshall war program. Every one of the Democratic " liberals" now being strengthened by Wallace backing supports the Truman Doctrine, the huge military budget and peacetime conscription.

Among these are Chester Bowles, running for Connecticut Governor, of whom Wallace only two weeks ago said, "Bowles doesn't think that peace is important" and, " I don't know how good he'd be for peace." Another, Representative Helen Gahagan Douglas, of California, spurned the Wallaceite endorsement with the statement that "I strongly support the Marshall Plan."

This opportunistic and unprincipled move by the Wallaceite leaders is exactly what is to be expected from a splinter capitalist party composed of disgruntled Democratic "liberals," middle-class confusionists and Stalinist adventurers. Wallace had previously shown his colors when he said that if war came he would "naturally" support the war and that he is "the best defender of capitalism."

The millionaire demagogue Wallace and his party cannot fill the political vacuum created by the lack of an independent mass party of the working-class, a labor party based on the unions. The American workers need their own party, under their own control, running their own candidates and in uncompromising opposition to all the capitalist parties. That is the program the Socialist Workers Party fights for. That is the program you will be voting for when you vote for Dobbs and Carlson on Nov. 2. 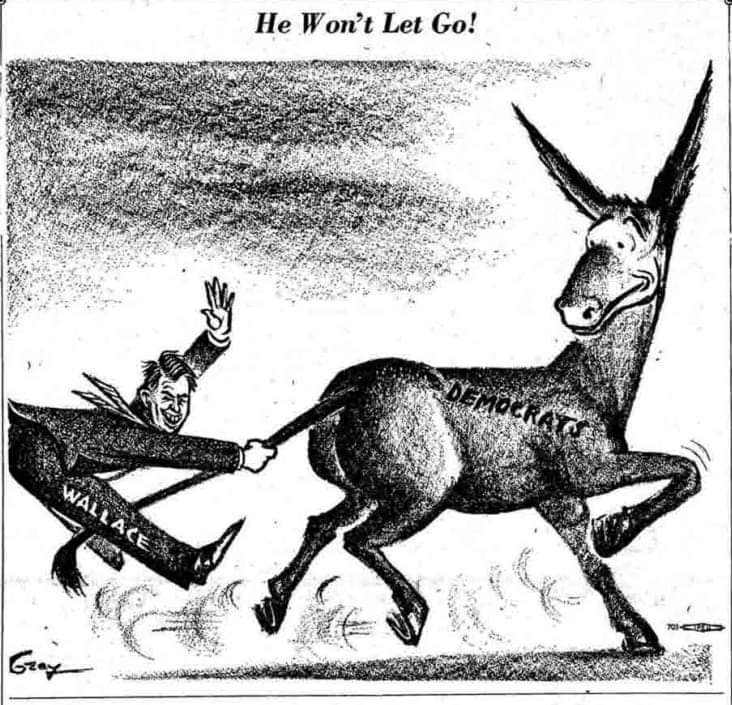