From anti-Zionism to anti-Semitism: Workers World Party and the political degeneration of Caleb Maupin 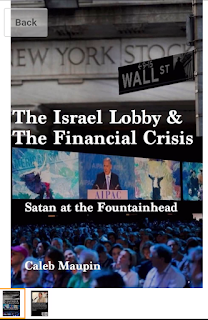 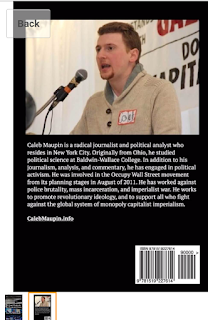 My former Cleveland friend Caleb Maupin has taken another horrible step in his political devolution from Avakian to Marcy to Khomeini-Assad-Putin. He has released a book called Satan at the Fountainhead: The Israel Lobby The Financial Crisis.

According to the thumbnail Amazon description:


This book is an honest attempt to answer the questions of those who want to know what happened. In the view of the author, the catastrophic events of 2008 and the continued economic decay of the United States, are the culmination of a number of policies and trends. These trends and policies, carried out by both the government and the private sector, are not isolated from global events. US foreign policies, specifically those related to the ongoing conflicts in the Middle East region, are directly linked to continuous economic decline and the 2008 financial crash. The key players who are responsible for the crisis have not limited their malfeasance to US soil.


Maupin, until recently a member and leader of Workers World Party, has a website here. His earlier blog is here.

About the new book, a friend correctly noted today on Facebook:


" 'Left' meets antisemitic far right. Here's the new book by a person closely associated with the Workers World Party. A case study in the evolution towards national socialism. I think they may want to consider taking some distance from him."


This book is part of a more general trend in the middle class left in the last two decades: a convergence with anti-Semitism, usually disguised as a critique of "Zionism."

The Militant, newspaper of the U.S. Socialist Workers Party (which I support) has been writing about this phenomenon for the last 15 years. I excerpted some of the best early articles several years ago in this blog post.

It is one thing to read articles about such evolutions. It is something else entirely to witness it first hand.


Workers World Party, here is how you miseducate the youth!

Here are the bitter fruits of "anti-Zionism" and "we are all Hezbollah” and gloating gleefully in the pages of your newspaper when Jews are stabbed on the streets of Israel.

Your leaders approved Maupin becoming an RT guest, then a Press TV employee, and then an attendee at various Tehran conferences with this crowd of Jew-haters.

You approved him writing for the Putinist New Eastern Outlook.

Maupin made his own choices, but your opportunist "whateverism" prepared the way. Your leadership approved him working in this fetid milieu.

You facilitated and abetted this diabolical transformation.

This is your handiwork, Workers World Party.


Workers World Party gets it wrong on anti-Semitism


Uighur nationality does not exist for Workers World Party leader


An article on the character of the 2014 New Horizons Conference in Tehran can be found here.

Posted by Jay Rothermel at 1:50 AM