Sorrows and miseries of liberal positivism 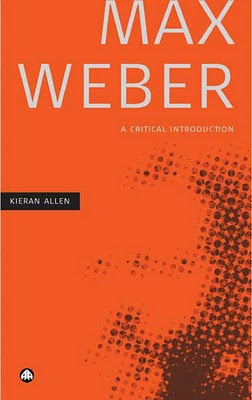 This is a very critical introduction to the theorist who is still being presented to generations of sociology students as the ‘liberal’, ‘value free’ and ‘sophisticated’ alternative to the supposed ‘economic reductionism’ of Karl Marx. As such it will be extremely useful to teachers and students alike.

Kieran starts by showing that Weber had a political agenda just as clearly defined as that of Marx. But while Marx identified with the workers’ struggle against capitalism, Weber identified with the interests of the German state. It was this which prompted his first sociological writings on the conditions of farm workers in eastern Germany, and it remained one of his central concerns through the rest of his life, leading him, for instance, to rejoice at the First World War.

Along with the nationalism (although at times in contradiction to it) went the strong influence of the Austrian school of marginalist economics with a view of society as made up of atomistic, self-interested individuals. Weber wrote, ‘I have become a sociologist mainly to exorcise the spectre of collective conceptions which still lingers among us. Sociology must proceed from the actions of one or more separate individuals and must therefore adopt strictly individualistic methods.’

This meant ruling out completely an approach such as Marx’s, which saw society as shaping the identities of individuals. It was this element which underlay the promotion of Weber by subsequent pro-capitalist sociologists like Talcott Parsons.

Kieran is not, however, just concerned with putting the record straight on such matters. He goes on to show how Weber’s methodological starting points undermine many of his analyses. So, he argues, Weber ends up defying the historical evidence and seeing Protestantism as the cause of the rise of capitalism because he ignores much of the wider social setting of the time (the crisis of feudalism, the development of the forces of production, the enclosures, the creation of colonial empires, the primitive accumulation of capital). So Weber does not see that those great social changes led people to reinterpret religious beliefs in different ways, according to the material lives they led. Only for a minority were the resultant Protestant views an embodiment of proto-capitalist values (that is why modern German historians distinguish between the burghers’, princes’ and peasant reformations). Kieran shows how Weber’s understanding of the world’s other great religions was distorted by his desire to prove they produced economic stagnation, even when the facts should have shown him otherwise. Only thus could Weber claim that it was some peculiar long term European trend to greater rationality embodied in religious belief that produced capitalism.

Weber’s ‘methodological individualism’ meant tearing individuals out of the total social set of relations in which they found themselves – relations inseparable from the conditions under which they were able to make a livelihood. The result was a fragmentation of the historically developing social whole into fragmented concepts – ‘status’, ‘charisma’, ‘power’. It could only then be stuck together again by seeing some secular tendency in the development of ideas (or, in the cases of non-European society, against the development of ideas) as infecting people’s minds.

Kieran points to another consequence of Weber’s method (still to be found in much modern sociology). There is a tendency to give the same name to the quite different phenomena of quite distinct societies and then claim they are the same thing. So capitalism, for Weber, has existed for time immemorial (although not always in its ‘rational’ form); ‘status’ describes both certain mechanisms of exploitation in pre-capitalist societies and differentiation within the exploited classes of capitalism; the term ‘family’ is used to equate the very different social relations established in different sorts of societies to ensure the reproduction of the human species.

That does not mean, for Kieran, that we can simply dismiss out of hand everything Weber ever wrote. He points out that Weber’s writing on the impact of slavery on the development of the Roman Empire comes very close to being the sort of materialist account you would expect from a Marxist. And Weber did on occasions point to phenomena that any full Marxist account of society has to incorporate.

But the precondition for doing so is breaking with Weber’s own methodology. Weberianism presented as an alternative to Marxism is simply a set of empty abstractions which do not make any sense of the mass of empirical material Weber himself pulled together. Hence the sheer difficulty of reading through his voluminous writings on non-western religions. They give you a headache without doing much more than provide footnotes to the best Marxist writings.

This well argued and clearly written book will save people who are forced to study Weber a lot of effort and point them to more fruitful ways of looking at the society.