From Grynszpan to Micah Xavier Johnson

Dallas, Texas sniper Micah Xavier Johnson acted out what lots of people FEEL, and are justified in feeling: revulsion, contempt, and hatred of the cops.

The role of a movement and a communist party is to recruit such people and win them to think politically.

The fact that Black Lives Matter movement events around the U.S. today seem to be undiminished is a promising sign.

It is clear to anyone even slightly acquainted with political history that the policy of the fascist gangsters directly and sometimes deliberately provokes terrorist acts. What is most astonishing is that so far there has been only one Grynszpan. Undoubtedly the number of such acts will increase.

We Marxists consider the tactic of individual terror inexpedient in the tasks of the liberating struggle of the proletariat as well as oppressed nationalities. A single isolated hero cannot replace the masses. But we understand only too clearly the inevitability of such convulsive acts of despair and vengeance. All our emotions, all our sympathies are with the self-sacrificing avengers even though they have been unable to discover the correct road. Our sympathy becomes intensified because Grynszpan is not a political militant but an inexperienced youth, almost a boy, whose only counselor was a feeling of indignation. To tear Grynszpan out of the hands of capitalist justice, which is capable of chopping off his head to further serve capitalist diplomacy, is the elementary, immediate task of the international working class!

All the more revolting in its police stupidity and inexpressible violence is the campaign now being conducted against Grynszpan by command of the Kremlin in the international Stalinist press. They attempt to depict him as an agent of the Nazis or an agent of Trotskyists in alliance with the Nazis. Lumping into one heap the provocateur and his victim, the Stalinists ascribe to Grynszpan the intention of creating a favorable pretext for Hitler’s pogrom measures. What can one say of these venal “journalists” who no longer have any vestiges of shame? Since the beginning of the socialist movement the bourgeoisie has at all times attributed all violent demonstrations of indignation, particularly terrorist acts, to the degenerating influence of Marxism. The Stalinists have inherited, here as elsewhere, the filthiest tradition of reaction. The Fourth International may, justifiably, be proud that the reactionary scum, including the Stalinists, now automatically links with the Fourth International every bold action and protest, every indignant outburst, every blow at the executioners.

It was so, similarly, with the International of Marx in its time. We are bound, naturally, by ties of open moral solidarity to Grynszpan and not to his “democratic” jailers, or the Stalinist slanderers, who need Grynszpan’s corpse to prop up, even if only partially and indirectly, the verdicts of Moscow justice. Kremlin diplomacy, degenerated to its marrow, attempts at the same time to utilize this “happy” incident to renew their machinations for an international agreement among various governments, including that of Hitler and Mussolini, for a mutual extradition of terrorists. Beware, masters of fraud! The application of such a law will necessitate the immediate deliverance of Stalin to at least a dozen foreign governments.

The Stalinists shriek in the ears of the police that Grynszpan attended “meetings of Trotskyites.” That, unfortunately, is not true. For had he walked into the milieu of the Fourth International he would have discovered a different and more effective outlet for his revolutionary energy. People come cheap who are capable only of fulminating against injustice and bestiality. But those who, like Grynszpan, are able to act as well as conceive, sacrificing their own lives if need be, are the precious leaven of mankind.

In the moral sense, although not for his mode of action, Grynszpan may serve as an example for every young revolutionist. Our open moral solidarity with Grynszpan gives us an added right to say to all the other would-be Grynszpans, to all those capable of self-sacrifice in the struggle against despotism and bestiality: Seek another road! Not the lone avenger but only a great revolutionary mass movement can free the oppressed, a movement that will leave no remnant of the entire structure of class exploitation, national oppression, and racial persecution. The unprecedented crimes of fascism create a yearning for vengeance that is wholly justifiable. But so monstrous is the scope of their crimes, that this yearning cannot be satisfied by the assassination of isolated fascist bureaucrats. For that it is necessary to set in motion millions, tens and hundreds of millions of the oppressed throughout the whole world and lead them in the assault upon the strongholds of the old society. Only the overthrow of all forms of slavery, only the complete destruction of fascism, only the people sitting in merciless judgment over the contemporary bandits and gangsters can provide real satisfaction to the indignation of the people. This is precisely the task that the Fourth International has set itself. It will cleanse the labor movement of the plague of Stalinism. It will rally in its ranks the heroic generation of the youth. It will cut a path to a worthier and a more humane future. 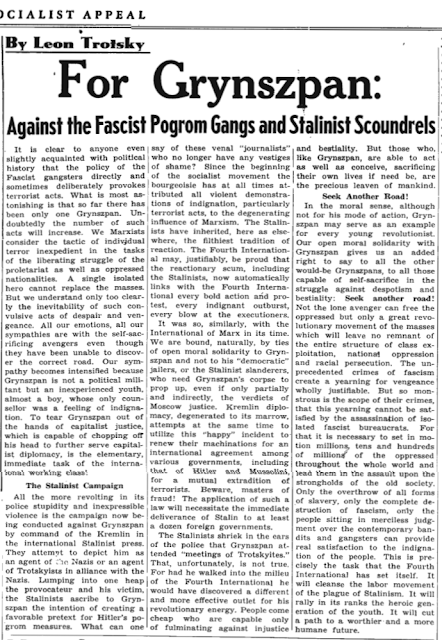 Posted by Jay Rothermel at 3:36 PM