Alienation in Marx: The Grundrisse

From: Ernest Mandel's The Formation of the Economic Thought of Karl Marx: 1843 to Capital.

Chapter 10 From the Economic and Philosophic Manuscripts to the Grundrisse: From an Anthropological to a Historical Conception of Alienation

….In order to complete the picture, we must add to this passage others in the Grundrisse in which Marx describes the total subjection of “living labor” to “objectified labor” (“dead labor,” fixed capital),71 and the remarkable passage in which Marx explains the difference between “repulsive” labor, the labor of the slave, the serf, and the wage worker, on the one hand, and “free labor,” “attractive labor,” on the other.72

There are also other passages in the Grundrisse in which the concept of alienation reappears explicitly. In particular there is the very important passage in which Marx returns to the distinction between objectification and alienation: “The bourgeois economists are to such an extent prisoners of the concepts of a particular historical phase in the development of society that the necessity of the objectification of social labor power seems to them inseparable from the necessity of the alienation of this labor power in relation to living labor. … No special intelligence is needed to understand that, given the free labor that had emerged from serfdom, or wage labor, machines could not effectively be created otherwise than as property which was alienated from them [the workers] and which appeared to them as a hostile power, that is, which was bound to confront them as capital. It can be understood just as easily, however, that machines will not cease to be agencies of social production when they become, for example, the property of the associated workers.”73

And, above all, there is the following passage which recalls almost word for word the Economic and Philosophic Manuscripts: “But if capital appears as the product of labor, the product of labor appears, in the same way, as capital—not merely as just a product, nor merely as an exchangeable commodity, but as capital: labor objectified as domination, as the power to dominate living labor. It thus appears so much a product of labor that its product appears as an alienated quality [my emphasis—E.M.], an independent mode of existence with which living labor is confronted, a value existing for itself, and the product of labor is crystallized as an alien power [my emphasis—E.M.] in relation to labor. From labor’s own standpoint, labor appears as being active in the production process in such a way that it at the same time detaches from itself its own realization … as an alien reality, and thus presents itself as a capacity for labor which is without substance, filled exclusively with needs, confronted with the alienated reality [my emphasis—E.M.] which does not belong to it but to others.”74

….With the slow progress of the social productivity of labor, an economic surplus progressively comes into being. It creates the material conditions for exchange, for the division of labor, and for commodity production. In the last, the individual is alienated from the product of his labor and from his productive activity, and his labor increasingly becomes alienated labor. This economic alienation , which is now added to social, religious, and ideological alienation , is essentially the result of the social division of labor, of commodity production, and of the division of society into classes. It produces political alienation , with the rise of the state and the phenomena of violence and oppression that characterize the relations between men. Under the capitalist mode of production, this multiple alienation reaches its climax: “The transformation of all objects into commodities, their quantification in fetishistic exchange values [becomes] … an intense process which affects every objective form of life.” 77

Economic alienation acquires an extra aspect in technical alienation , because the worker is not merely alienated from his instruments of labor but finds them opposed to him as an alien and hostile power which enslaves and stifles him and deprives him of his elementary potentialities of self-development. 78 But this same mode of production creates, with the universality of exchange relations and the development of the world market, the universality of human needs and human capacities, and a level of development of the productive forces that makes it objectively possible to satisfy these needs and bring about the all-around development of man. 79 Ending the capitalist order then makes possible the progressive withering away of commodity production, of the social division of labor, and of the mutilation of human beings. Alienation will not be “abolished” by a single event, any more than it appeared all at once. It will wither away progressively, just as it appeared progressively . It is not rooted in “human nature” or in “man’s existence,” but in specific conditions of labor, production, and society. It thus is possible to glimpse the conditions necessary for it to wither away.

I do not share the view of Gajo Petrović that alienation means non-realization of human potentialities that have already been historically created.80 If that were so primitive man (who actually did realize the potentialities that existed in his time) would indeed have been a non-alienated man, contrary to what Petrović himself says. The following observation by Helmut Fleischer seems to define the problem better: “Some of the relationship of alienation revealed by Marx may be born of previously integrated unities; but in its general anthropological sense, alienation cannot be a loss of something that has already been, in its essentials, previously possessed; the concept must have a forward-looking rather than a backward-looking meaning; it could signify that one lags behind in relation to what is already possible, rather than that one has lost what one once already possessed. For the positive notion (contrasted with that of alienation) of what is proper to man cannot be conceived, according to Marx’s premises, as a Platonic idea or an Aristotelian entelechy, but rather as an anticipation or projection which is rooted in nature and linked with a historical situation, and more. precisely as a completed projection which starts from the horizon of the given social problematic …”81

However, these concepts of “anticipation” and “projection” should not be confined within that of what is already historically possible, as the writer seems to confine them in the first part of the passage quoted. For one of the special features of man’s capacity for anticipation is precisely that he can set himself problems long before the conditions for solving them have matured. The hope of a society free from oppression and exploitation, without class divisions or alienation, could arise in classical antiquity or in the Middle Ages, long before the conditions for creating such a society had become “historically possible.” The fact that this dream could arise gives expression, however, to a subjective awareness of alienation, just as much as it reflects an objective reality. The same is true, mutatis mutandis, of primitive religions.82

Some writers have spoken of a transformation of the primitive Marxist theory of alienation into a “general theory of the fetishistic character of commodities.”83 I do not think this formulation is correct. It is true that Marx reduced human alienation in society based on commodity production essentially to the reification of human and social relations caused by commodity relations. But, in the first place, he made this reduction only so far as the essence of the matter was concerned, and not for all aspects of alienation; for even in bourgeois society the concept of alienation embraces a wider field than that of “reification” or of “commodity fetishism” (e.g., alienation on the plane of consumption, alienation of the individual’s capacities for development, alienation of socially possible knowledge, etc.). And, furthermore, Marx continued to speak of alienation in primitive society, as we see from the Grundrisse passage quoted above, though in that society there was neither commodity production nor, a fortiori, commodity fetishism.

The social significance of the three mystificating interpretations of the relationship between the Economic and Philosophic Manuscripts and Capital, the three mistaken interpretations of the relationship of the mature Marx with the anthropological concept of alienated labor, can now be better understood. They reflect certain historical conditions and definite social and economic contexts which explain their appearance, over and beyond the accidental fact of the publication of the Manuscripts in 1932.

For the bourgeoisie it is a question, after the remarkable rise of the Marxist-inspired labor movement, of “integrating” Marx by reducing him entirely to Hegel. At the same time, the bourgeoisie tries to “de-fuse” the explosive revolutionary significance of Marx’s teaching in order to integrate him, as “thinker” and “philosopher,” into a capitalist world conceived, if not as the best of worlds, then at any rate as the least bad of all possible worlds.

Reformist social-democracy marches in step with the bourgeoisie. But it has more difficulty in identifying the Marx of the youthful writings with the Marx of Capital. For a long time it strove to hide the revolutionary character of Marx’s work by upholding a mechanistic interpretation: the task of overthrowing the capitalist mode of production was entrusted to the “inexorable development of the productive forces” rather than to the action of the organized proletariat.

When, however, the economic crisis of 1929–1933 and the rise of Fascism showed everyone that there was no inevitable cause-and-effect relationship leading from the undoubted conflict between the level of development of the productive forces and capitalist production relations, on the one hand, to the coming of socialism, on the other, social-democratic ideology was obliged to change its approach. After having for a long time disdained the works of Marx’s youth,84 social-democracy suddenly sought inspiration in them to counterpose an “ethical message” to hopeless capitalist reality, to the socialist revolution for which it had no enthusiasm, and to the degeneration of that revolution in the Soviet Union in the Stalin period, which provided a welcome foil.... 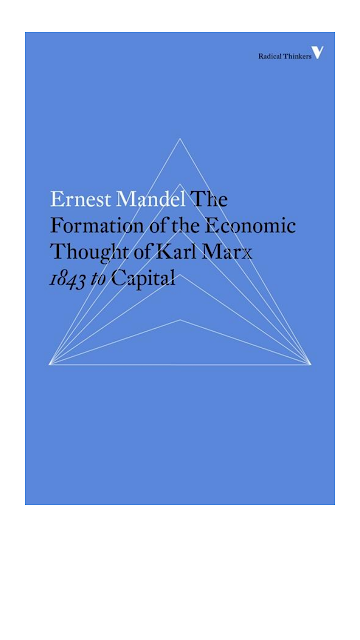 Posted by Jay Rothermel at 3:27 PM