Living in the beginning times... 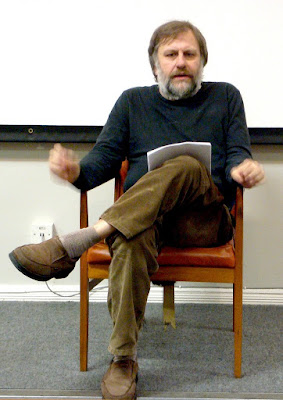 Zizek and the End Times

The End of the World as We Know It

It's the end of the world as we know it. Slavoj Zizek has several ideas why. Foremost among them is the coming end of the economic system we know as capitalism. Although you wouldn't know it by its champions around the world (especially in the USA) the last few decades have been rough on capitalism. In order to maintain its necessary expansion, credit has been extended to individuals and institutions that would never have qualified for it before 1973. This has enabled consumer purchasing power to extend beyond most people's earning ability. Furthermore, many services that were formerly provided by government are now privatized. This phenomenon includes some schools, libraries, and certain military, police and security operations. This transition has been precipitated by the continual decrease in tax bills for the very rich and the de-prioritizing of all social services. Naturally, the military continues to devour most national budgets in many countries, especially in the United States. This fact combined with the aforementioned privatization of some military operations, prisons, and police functions, has created a situation where the poor and so-called middle classes watch their futures grow dimmer while the wealthy circle their wagons on a global scale to insure what they hope will be their continued dominance.

Zizek says the wealthy are victims of their own wishful thinking. Eventually, the dystopia monopoly capitalism is creating will spread its shadow over all. Unemployed, employed, owners, CEOs and financiers. The moment of critical mass is at hand. The masters of capital have few if no more cards up there sleeves. They will most certainly try some tricks that they used in the past in what will ultimately prove to be useless attempts to rebuild the capitalist planet, but the facts are obvious. There are fewer and fewer markets to create then exploit. Buying and selling credit and debt with other credit and debt can only fool the piper for so long. The time to pay that piper is nigh.

I once had a friend whose family left the Netherlands right before the Nazis took that nation over. I'm not sure if she was Jewish, but her mother knew that none of them would survive long once the Third Reich moved into their neighborhood. Who knows, maybe they were communists. Anyhow, back in 1981 when the Polish workers went on a nationwide strike after the country's Stalinist government brutally attacked workers associated with the Solidarnosc movement, she mentioned her fears for the Polish people while we were waiting for the bartender at the club we were in to bring us another beer. I began talking about a couple strikes in the United States that I had worked on a few years earlier. My friend cut me short by saying that all assumptions should be tossed out and that those who understood how to take care of each other would fare better than most everyone else in the future.

This understanding is not very present in the capitalist mindset, even (if not especially) among those that work in its shops, factories and fields. Instead, workers tend to assume the philosophy of those who pay them. Believing that the individual is the key to survival, the road to privatized dystopia is not only accepted, it is cheered by an apparent majority.

Back to Slavoj Zizek. His most recent book, titled Living In the End Times, is an adventure. A bit verbose, the rock star philosopher examines the state of things on planet earth early in the twenty-first century. By dividing his analysis into what grief counselors call the five stages of grief, Zizek looks closely at the nature of the problem--capitalism and its culture. He examines the causes by traveling through Western philosophy and holds the entire dilemma up against the critical facilities of Marx and Engels. The journey is fascinating despite the use of ideas as practical applications of other ideas--a philosopher's trick that tends to obfuscate instead of clarify. The chapters that immediately follow each of those named after the aforementioned stages are where Zizek most applies what he is trying to say about world political and cultural reality. In other words, it is in these chapters Zizek attempts to apply his ideas to something real. However, it is often the medium of film that he uses to illustrate his points. It's as if Plato's shadows on the cave had become that which cast those shadows. Not unlike Ronald Reagan and his confusion, Zizek refers to film as if it were real.

I recently read an article about the current economic crisis that said individual greed caused the events. While this is true to a certain extent, the facts have a lot more to do with the critical mass mentioned above. The finance industry needed to find something to sell because the market was saturated and people could not afford what was out there unless their credit was stretched beyond that which was reasonably practical to pay. Essentially, capitalism at its current stage creates and enables greed because its machinery knows that is what keeps it alive.

There are a couple ways to fight against the coming end. One method is currently unfolding in the United States and the other rears its angry head in places like Greece and France (and most recently Great Britain). The former is a method that coincides as neatly as a lap joint with the individualistic culture of the United States. This method is best expressed in today's political milieu by the Tea Party. Their obsessive individualism pretends that every human really is an island and is therefore has the right to hoard, keep and protect what he believes to be his. Everyone else can go to hell. Underlining this disorder is a belief that every one can become rich if they only work hard enough. As anyone that has looked at who funds the Tea Party knows, this egocentric philosophy is championed by a few extremely wealthy social Darwinists.

The other method is one that depends on solidarity and mass action. The Greeks and French folks in the streets understand that this crisis is not an act of god, it is not inevitable and it is directly related to the current stage of monopoly capitalism--capitalist globalization. They know that the masters who make the rules have different priorities than the masses and that the only way to change those priorities to reflect those of the workers (employed and unemployed) and others the wealthy want to disempower. Given this, notes Zizek, then perhaps the only way to do so is in such a way that public order is disturbed. As an example he cites the Greek protests of 2008 in Greece after police killed a teenager. If one recalls, those protests spread across Europe. Anything less than direct action that upsets the applecart of the State is ineffective either because the State ignores them or coopts them. As an example of the latter, Zizek points to the official response of Washington and London to the February 15, 2003 massive protests against the impending invasion of Iraq. Once the protests were over, the invasion occurred. However, the polite protesters were able to feel good that they had done what they felt they could to prevent it, while the invading governments could point to the protests as an example of "how democracy works." When, in essence, it really only worked for those governments and the war machine they are an integral part of.

Among his many targets, Zizek includes liberal democracy. He agrees that its failures are all too clear. Many of these failures can be attributed to the fact that economic liberalism and the so-called free market has trumped political liberalism. It was Herbert Marcuse who wrote in his book One Dimensional Man: "Freedom of thought, speech, and conscience were-just as free enterprise, which they served to promote and protect--essentially critical ideas, designed to replace an obsolescent material and intellectual culture by a more productive and rational one. Once institutionalized, these rights and liberties shared the fate of the society of which they had become an integral part. The achievement cancels the premises." In fact, insists Zizek, those rights are now counter to the greater project of maintaining the capitalist system no matter what its guise may be.

This is despite the fact that most citizens of western democracies (and probably democracies in other parts of the world as well) prefer the social freedoms and equality that political liberalism promises. However, the free market, because it is not really free in that word's greater sense, finds that it can not survive in a world where there is no inequality. Capitalism, after all (and especially monopoly capitalism) creates (and needs) haves and have-nots. Consequently, those leaders who champion political liberalism and democracy find themselves acceding to the demands of those who believe the marketplace trumps all other realities. In other words, political liberals, also being firm believers in the marketplace, succumb. Nothing proves this better than the Obama presidency.

Speaking of that presidency, in a discussion of Tony Blair's last election, Zizek points out that Blair was the most unpopular person in Britain in 2005. Yet, because there was no official way to express displeasure, he was reelected. The most recent elections in Great Britain and the United States take this a step further. Voters are frustrated with the lack of change but see no official way to express that, so in Britain they put a Liberal-Conservative coalition in power that is doing exactly what New Labour planned to do. In the US, they either voted for the faux populist Tea Party, or they didn't vote at all. In the meantime, a bipartisan panel has recommended major changes in Washington's Social Security and Medicare, while other austerity measures are put in place in both nations. The war in Afghanistan continues to escalate and any pretense of a withdrawal is slowly washed from memory. Nothing will change. At the same time, change must come. Mr. Zizek describes the situation in his own way in Living In the End Times, but in the end the text is merely an intellectual's intricate plaything.

If we are to effect change, books like Mr. Zizek's Living In the End Times are not going to be the spark that lights the prairie fire, no matter how cleverly written. Although Zizek's text is poetntially important to those who will take the time to read it, I am still convinced that our search for a better future is better served by reading the first chapters of a small book first published on February 21, 1848. That book? The Manifesto of the Communist Party by Karl Marx and Friedrich Engels. I think Mr. Zizek would agree.