NEW IN ENGLISH & SPALabor, Nature, and the Evolution of Humanity: The L 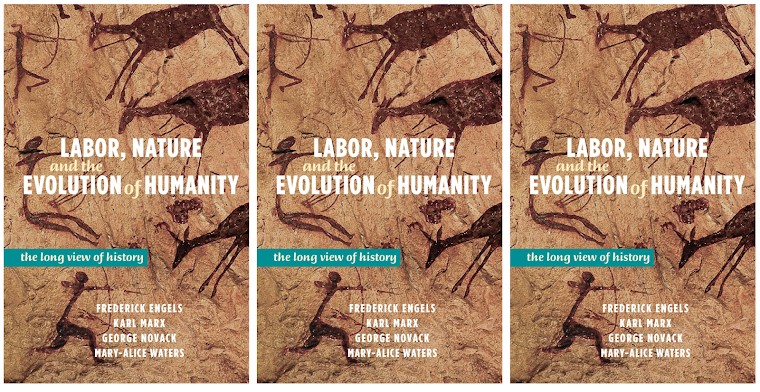 [....]Since the May 2 leak of the Supreme Court’s draft opinion overturning Roe v. Wade, some 24 violent assaults have been carried out on pregnancy centers.

A group called Jane’s Revenge said it carried out some of the attacks, leaving graffiti on site reading, “If abortion isn’t safe, you aren’t either.” On June 14 the group vandalized the Minneapolis center of the Minnesota Citizens Concerned for Life.

On June 10 pro-abortion activists threw an incendiary device through the window of the Gresham Pregnancy Resource Center near Portland, Oregon. The center provides counseling and medical services to women and new mothers.

In a press statement, Jane’s Revenge threatened more violence that “may not come in the form of something so easily cleaned up as fire and graffiti.… Any anti-choice group who closes their doors, and stops operating will no longer be a target.” It added, “But until you do, it’s open season.”

Protesters seeking to resurrect the fatally flawed Roe decision — which cut off needed debate on how to win women’s rights — released maps of the homes of conservative Supreme Court justices and are organizing pickets there. A group called Ruth Sent Us published the details of the church that conservative Justice Amy Coney Barrett goes to and the name of the religious school her children attend, targeting them for attack and undermining the right to worship.

Walls were put up around the Supreme Court June 9, a day after Nicholas John Roske was arrested outside the home of Justice Brett Kavanaugh. Roske was armed with a Glock handgun, ammunition, knife, zip ties and pepper spray. He told the police he planned to kill Kavanaugh and then commit suicide. Roske’s arrest received little coverage in much of the liberal press.

“These types of actions do nothing to advance women’s rights,” Candace Wagner, Socialist Workers Party candidate for governor of Pennsylvania, told the Militant. “They are the opposite of what working people need — the opportunity to discuss and debate how we can join together to protect ourselves and our families, fight for jobs, better wages and working conditions and the many other things we need, such as access to family planning, including contraception as well as safe and secure abortion.”

A sign of the intensity of the factional warfare between Democratic and Republican parties was the decision by 27 House Democrats to vote against a bill to provide 24-hour security at the homes of all Supreme Court justices.

Full:
Liberals assault on Trump, Supreme Court is threat to political rights – The Militant
Posted by Jay Rothermel at 11:59 AM No comments:

Liberals assault on Trump, Supreme Court is threat to political rights – The Militant

The Democratic Party’s relentless drive to prevent former President Donald Trump from running again in 2024 stepped up a gear starting June 9 with hours of televised House Select Committee hearings probing the Jan. 6, 2021, incursion at the Capitol building. These hearings are key for the Democratic Party’s 2022 election campaign, as President Joseph Biden has failed to accomplish anything of note to relieve the blows working people are taking today, and his popularity is plummeting.[....]

Full:
Liberals assault on Trump, Supreme Court is threat to political rights – The Militant
Posted by Jay Rothermel at 11:52 AM No comments:

Workers need our own party, a labor party! – The Militant

....We face a broader social crisis bred by dog-eat-dog capitalism. Years of mounting drug addiction is feeding a staggering rise in deaths from overdoses. The coarsening of human relations and breakdowns in solidarity are evident in mounting homelessness, mental illness and rising violent crime. The capitalist class has no interest in eradicating these deadly social ills. Any attempt to do so would eat into their profits.

When the Democrats and Republicans say they aim to protect “all Americans,” it’s a lie. Like all capitalist countries, the U.S. is class divided, and the capitalist rulers are out to defend their class interests against those of workers and farmers, both at home and abroad.

The capitalist rulers are driven today to cutthroat competition with rivals abroad to prevent going under. Moscow’s invasion of Ukraine has further fractured the imperialist “world order” that issued from Washington’s emergence as top dog from the carnage of the Second World War. All capitalist regimes worldwide are building up their military and seeking space to defend their rulers’ property and power. This growing world disorder is feeding new wars — like Ankara’s announcement June 1 of plans to invade northern Syria to deal blows to Kurds there fighting for independence. Capitalism is marching towards bloodier national conflicts and a third world war.

Only the working class is capable of leading millions of the exploited and oppressed in revolutionary struggle. To do that we need to build a labor party, a party with a class-against-class road forward. Through our struggles, workers discover our own capacities for courageous, united and disciplined action and can forge an alliance with small farmers. We learn to rely on fellow toilers and unlearn what the rulers never cease telling us we’re incapable of doing.

Forging a tried and trusted revolutionary leadership from the ranks of our own struggles is crucial to advancing along a road to replace capitalist rule with a workers and farmers government. That is what the Socialist Workers Party exists for.

Workers need our own party, a labor party! – The Militant
Posted by Jay Rothermel at 11:25 AM No comments:

Gun violence, crime are result of today’s crisis of capitalism – The Militant

Senseless murder and other anti-social violence are a byproduct of a system based on the brutal exploitation of the toiling majority by the capitalist ruling families and the dog-eat-dog values it breeds. Saying this is not to excuse the inhuman rampage of Ramos, and others who have laid waste to innocent lives. It is where we have to start in charting a working-class course to deal with this reality.

All class societies based on private property have depended on oppression and state-organized violence to maintain the rule of the exploiting minority.

Capitalist rulers are different only in so far as they take that violence to savage new heights with their imperialist wars of the last century, their stockpiling of an arsenal of nuclear weapons, and the brutal violence they unleashed against colonial peoples fighting for their independence.

At home, the daily brutality of their drive to profit off our backs and their criminal “justice” system with its prisons and death penalty, all breed a system of “look out for number one” and violence.

Despite workers’ hard-fought efforts to unite, to form unions and fight for gains for all, the capitalist class continues to drive production with complete disregard for workers’ lives and limbs. Every year more than 5,000 workers are killed on the job in the U.S. Many more die from work-related diseases. Other workers are sentenced to death by the capitalist rulers’ for-profit “health care” system and nursing homes.

Working class is bearer of solidarity

But the working class can overthrow capitalism and its inherent brutality. Since capitalism emerged, the working class has grown massively, and, since the Second World War has become a majority in every corner of the world. Along with it have grown habits of mutual trust, working-class solidarity and opposition to racism and other forms of prejudice that workers learn through our common struggles. When we join together to defend ourselves we begin to recognize our self-worth and collective capacities.

During mass struggles, violent crime within the working class begins to diminish. That was true during the Black-led working-class movement that uprooted Jim Crow segregation, as millions discovered they had something worth uniting and fighting for. That victorious struggle was made possible by our determination to stand up to the state power of the capitalist class. It involved both the power of our numbers and, when necessary, disciplined armed self-defense against state-sanctioned violence and the terror from those trying to uphold racial segregation.

In the course of coming class struggles, workers and farmers will face violent assaults from the cops and fascist thugs that the rulers unleash to try to crush our efforts to fight for the jobs, wages, conditions and rights we need.

Ultimately it will take a fight to take political power out of the hands of the capitalist rulers to end the violence inherent in their system. That’s what workers and farmers in Cuba showed can be done.

Through a revolutionary war led by Fidel Castro and the July 26 Movement, working people took power, and did so with as little bloodshed as possible. They refused to mistreat or demean regime troops they captured. Their victory and the course charted by their communist leadership laid the foundations for workers and farmers to take the factories, land and banks from U.S. companies and native capitalists alike and for millions to begin transforming their conditions and themselves....

Gun violence, crime are result of today’s crisis of capitalism – The Militant
Posted by Jay Rothermel at 11:11 AM No comments:

The Militant takes up the question of guns and gun control. – The Union Of Workers

https://theunionofworkers.wordpress.com/2022/05/27/the-militant-takes-up-the-question-of-guns-and-gun-control/
Posted by Jay Rothermel at 2:08 PM No comments:

‘Capitalism won’t disappear by itself, it must be disappeared’ – The Militant
Posted by Jay Rothermel at 10:36 AM No comments:

[....]May 18 was the 78th anniversary of Moscow’s forced deportation of the entire Crimean Tatar people from their homeland to Central Asia in 1944. Soviet dictator Joseph Stalin said the Tatars were all agents of the Nazis. The date is marked annually by Tatars in Crimea and across Ukraine. Despite a ban on Tatar actions imposed for the past eight years since Russian troops seized and occupied the peninsula, hundreds gathered solemnly at a memorial monument in Kerch.

Over two days in 1944 over 200,000 Tatars were herded into cattle cars, locked in, and taken by rail deep into Russia, above. Over half died during the journey and by privation over the next two years.

After the collapse of the Soviet Union in 1991, waves of Tatars began returning home, to discover their homes had been seized under Moscow’s attempts to “Russify” the population. Today the Tatars, the native people of Crimea, make up some 12% of the population. With Ukraine’s independence in 1991, Tatar culture flowered and identification with Ukraine expanded....

Stalin’s 1944 exile of Crimean Tatars commemorated despite Russian occupation – The Militant
Posted by Jay Rothermel at 10:34 AM No comments: