What is "aleatory materialism"? 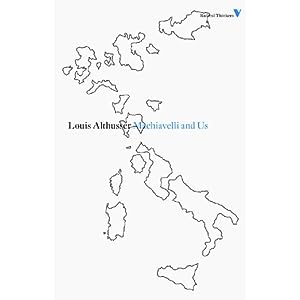 There are two mainstream interpretations of the work of Niccolò Machiavelli: he is seen either as the “the father of immoral ‘Realpolitik’” or as the “Renaissance era representative of the republican tradition” that sought to revive the political traditions of ancient Greece and Rome. In popular discourse it is the language of repression that passes for “Machiavellianism”; within the academy it is the republican Machiavelli, associated with the Cambridge scholar Quentin Skinner, that is dominant. In Politics and Philosophy Mikko Lahtinen seeks to uncover an alternative reading of Machiavelli’s work—the “aleatory materialist” approach first set out by the French Marxist philosopher
Louis Althusser.

Lahtinen describes how, for Althusser, Machiavelli was a part of a tradition running through the “underground” of materialist philosophy which he termed aleatory (dice-like) materialism, or “the materialism of the encounter”. Starting with the ancient Greek philosopher Epicurus and moving through Machiavelli, Spinoza, Hobbes, Rousseau, Marx and Heidegger aleatory materialism represented a “dangerous” current that questioned the “philosophical-religious, judicial and moral doctrines in which…the existing social order is legitimised” through its presentation as “the natural or rational order”. Throughout history this current was “underground”, subversive and hidden, as it ran against the common sense idealism in which divine or natural laws were held to determine the rationality of what is. Aleatory materialism stresses the contingency of the social order: what exists did not, and does not, have to. To craft a new society the range of alternatives that may result from human action, the possibilities for self-determination, must be understood. There is an “ultimate lack of guarantees” as to the path history may take. History has no pre-ordained end. The trajectory of the historical process is, then, influenced by active individuals or groups, actors or agents, which must pay particular attention to the strategy and timing of interventions if they are to be effective in achieving their aims.

For Althusser, Machiavelli was first and foremost a theorist of the “conjuncture”, a concrete moment of a complex whole determined by its specific characteristics. In each historical-political case the general and the specific are linked together to produce a unique combination. Lahtinen explains how, in Althusser’s Marxism, the nature of this unique combination is determined by the process of over- and under-determination. While the fundamental contradiction of capitalist society, between labour and capital, may be determining “in the last instance”, it manifests itself in different, more readily understood, ways. The contradictions in society are inter-dependent, and become displaced and congealed onto the overdetermined contradiction. The accumulation of these contradictions undermines the cohesiveness of the social formation, thereby presenting revolutionary opportunities, with the implication being that struggles erupt over issues that may not appear “fundamental” but nonetheless represent challenges to the system as it is. In deploying these concepts to analyse the conjuncture and understand the specific articulation of these antagonisms, a “concrete analysis of a concrete situation” could be produced and the revolutionary actor could derive the most appropriate course of action.

Lahtinen’s purpose in Politics and Philosophy is not solely to contribute to scholarship of Machiavelli, nor to intervene in the controversy that continues to surround Althusser’s Marxism, but to show what Machiavelli’s perspectives may offer us today. Seen through the lens of Althusser’s aleatory materialism Machiavelli becomes an “intellectual pointer, a revolutionary weapon, on the battlefield of global capitalism in our own ‘conjuncture’”.

In Machiavelli, Althusser found a Lenin of the Renaissance. If Lenin can be considered the paramount organic intellectual of the early 20th century proletariat, so Machiavelli was the organic intellectual of the “rising city-state bourgeoisie”. Much of Althusser’s earlier work (most famously Reading Capital and For Marx of the 1960s) was directed towards uncovering what he claimed was the “real” Marxist tradition. His study of Machiavelli (Machiavelli and Us) is part of his later, aleatory, work. But its purpose is the same: to uncover the subversive elements of a well-known writer, the true revolutionary nature of which had been obscured in the prevailing interpretations. Like Lenin, Machiavelli was a “theoretician of praxis”, a “man of action” who teaches us how to answer the question, “What is to be done?”

Lahtinen describes how Althusser treads between the two dominant interpretations of Machiavelli. His most famous work, The Prince, was neither “a guidebook for tyrants” nor a “guidebook to democracy” for the people, as supposed in the republican reading. Instead Althusser argues that, while The Prince is indeed written from “the viewpoint of the people”, the people did not constitute the primary agent in his political project—Machiavelli’s call is for a “new prince”. With this in mind it becomes a thoroughly bourgeois text, conditioned unapologetically by the conditions in which it was written. Althusser’s aleatory interpretation stresses the “struggles and conflicts”, the outcomes of which are not predetermined, that come before any “moment of passivity”.

Machiavelli’s The Prince was directed towards unification of the Italian Peninsula, a response to the declining power of the city-state form in view of the rise of the absolutist monarchies of France and Spain. The “organisation of a durable state” is his primary intention. For this, the aleatory must be tamed. Lahtinen only begins to unpack what the application of this concept to understanding modernity and state formation might mean: “Population censuses and statistics, timetables and calendars, the standardisation of measurements and monetary units, as well as nationalistic ideologies” are directed towards reducing unpredictability “by controlling the population with different methods.” Aleatoriness is simultaneously “a threat that should be averted” and the “possibility for political interventions and mass movements”.

Machiavelli articulated this within his own conjuncture. In order to construct a new type of polity, thus reducing the external threats that had plagued the city-states of the region, the class struggle between nobles and people must be displaced; the new prince must ally with the latter in order to form a mass movement that could take advantage of the concrete moment. Founding a new unified state is Machiavelli’s solution to the problem of a high degree of unpredictability, but the possibility of doing so relies upon that same unpredictability. His radically new form of state was to be a “national-popular” one, complete with an army based on a popular constituency as an early form of ideological state apparatus. The masses must enter the stage of history in order for Machiavelli’s project to become realised. But, in order to secure the new state, they must also be persuaded to exit it.

Despite successfully weaving together Althusserian Marxism with the political theory of Machiavalli, Lahtinen is sometimes at pains to explain the relevant elements of Althusser’s Marxism to the reader, and here there are far better introductions. Althusser’s particular, often elitist, conception of Marxism receives little critical analysis. Politics and Philosophy could have benefited from engaging with the debate that continues to surround Althusser—in particular, the potential problems of his aleatory materialism and a comparison with Antonio Gramsci’s reading of Machiavelli. Furthermore, the text is often hampered by lengthy footnotes that, while interesting to the specialist, do not aid the development of the overall argument.

However, in attempting to reintroduce Machiavelli to Marxists, Lahtinen performs a valuable service. Ignored in mainstream interpretations is the common concern between Machiavelli and Marx for the problem of power for the respective social groups they sought to represent. It should come as no surprise that Machiavelli was of great interest first to Gramsci, and second to Althusser. Third, he should be of interest to us. Published in English over a decade after its initial appearance in Finnish, Politics and Philosophy makes a timely arrival at the conjuncture the English-speaking Marxist tradition faces today.