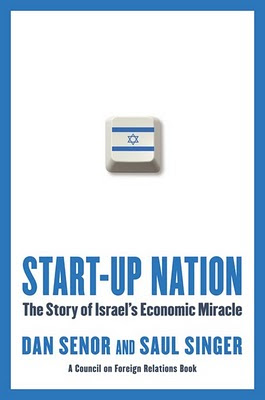 by Dan Senor and Saul Singer.

There are no Palestinians….

Israel is an amazing place as one puts together the implications from Start-Up Nation. It is a fount of free enterprise can-do entrepreneurial spirit. There are no resistances, although something called an Intifada concerned the authors somewhat, without being specified as to what it is/was. There are no freedom fighters nor insurgents, no guerrillas nor rebellions. For that matter there are no Palestinians as the word has been expunged from the authors’ vocabulary completely (unless it was in a boring anecdotal section that I skim read and missed - not likely). Israel, except for a few wandering Arabs, was “largely a barren wasteland.”

The only people - other than Jews, Zionists, and various other national entrepreneurs - to people this book are the terrorists, obviously dealt with very effectively by somebody within the Israeli Defence Forces (IDF). The authors use the media presumption that anyone against the state of Israel must be a terrorist and they are there for seemingly no reason at all, other than that ‘they are against us and hate us for what we are,’ an attitude one could expect from writers with Council on Foreign Relations background. Without these contextual placements, this work fails completely. Even accepting these contextual failures, the ‘miracle’ that is Israel is not very miraculous at all, but is based on what are normal means of establishing national wealth.

I knew before I read the book that I expected certain elements to be addressed in order for it to be a complete contextual presentation on this supposed miracle. The questions I asked, and that I wrote on the front fly-leaf of the book before reading even the cover flap were:

Does it mention the historical period before the war, before the UN Resolution, and immediately following the declaration of the state of Israel, when financial support from the U.K. and the U.S. had already become common place?

Is there a discussion of the occupation and settlements of prime agricultural land and the control of natural resources (the most important being water)?

Is there any effect of the hostage population of Palestinians in creating cheap labour markets and a captive sales market?

Is the technology trade with the U.S. discussed, and in its entirety of state of the art military technology and not just the run of the mill, out of date stuff sold to other countries?

Well no, there are no answers to these questions, except for the one on U.S. technology imports, answered only partially and perhaps inadvertently in a single line in the concluding section of the work. Shimon Peres is cited as saying, “Every technology that arrives in Israel from America, it comes to the army and in five minutes, they change it.” The technology Israel receives is state of the art technology in military and security hardware and software.

This supposed miracle, the innovative entrepreneurial businesses based mainly in the high tech sector, and more recently within the culture of venture capital and all its manipulations, is therefore a typical economists perspective with blinders on about the reality of the human condition in ‘Israel’, its lack of democracy, and its abrogation, denial, disobeying, and flaunting of international law and humanitarian rights.

The biases and purposeful (?) ignorances begin early in the work. The worst representation of this is the author’s statistic that “defense, counterterrorism, and homeland security companies today represent less than 5 percent of Israel’s gross domestic product.” The implication is that the military has a very small role in the Israeli economy.

A closer look at economic statistics reveals a different picture. First of all, defence is given as 6.8% of gross domestic product (GDP), a statistic often used to obfuscate the realities of wealth disparities and to hide the distribution of wealth. In 2008, the budget’s 16.2 billion dollars on defence was the highest ratio to GDP of all developed countries, on a per capita basis of $2,300. Aside from the GDP this budgetary figure becomes 17.5 % of the 2009 $92.6 billion Israeli budget.

This sum covers only the defence allocations and does not include the enormous amounts of research and development money that is poured into the technology sector - being much of the military sector - by both government and ‘private’ enterprise. That is the main myth presented in this work, that the Israeli economy is a miracle of entrepreneurial free enterprise combined with the can-do chutzpah of a “small and threatened” country.

The authors use the latter phrase several times in comparisons to South Korea, Taiwan, and Singapore in particular. The thread breaks when the information presented is all about how the IDF and the military are great training grounds for business entrepreneurship - which they well may be as they are both intertwined in the bigger economies of the world, in particular the U.S. They are also good for “inculcating” an ethos (inculcating coming from the Latin ‘to grind in with the heel’) of innovation, an ability to contradict authority, and the famous chutzpah.

The general trend of the work indicates two norms. The first is from the 1970s and early 1980s when a series of books were published discussing the highly innovative companies that had made the U.S. the business/economic leader of the world (In Search of Excellence, Peters and Waterman, Harper Collins. 1982 was the main one). All the business ideals extolled by Senor and Singer have been found in new upstart successful and excellent big businesses all along - it is not simply an Israeli trait.

The other norm that is exposed is the lie of ‘free enterprise’ and ‘private entrepreneurial’ spirit. It does not exist in Israel anymore than it exists in the U.S. Instead intensive state supports allowed the industries to be successful - this is what also initially propelled South Korea, Singapore, and Taiwan to economic power. It is not living “under threat” that made these countries wealthy, nor was it any particular unique strand of spirit, but rather the largesse provided by the state to grow and protect its own industries. Only after the wealth of the country was established did they dare open their markets in a supposedly free enterprise manner, a manner that really leaves the supranational corporations and financiers of the world free to ignore national regulations on a number of fronts.

Leaving perhaps that the miracle of Israeli business technological success is built on state support, imported state of the art technology, and a denial that the country is built on the farms, fields and villages of an occupied indigenous people. The way Start-Up Nation explains it all, chutzpah is the distinguishing factor - perhaps it is also really the force behind the Israel defiance of international law and international humanitarian rights concerning warfare and occupation that the authors choose simply to ignore. An ‘in your face we don’t give a damn’ attitude would certainly explain the erratic controls used by the IDF to enforce the subjugation of the occupied Palestinians. It would also explain the power the Jewish lobby and AIPAC have over the elected representatives of Congress in the U.S.

So this book does explain a lot - by omission in part, by inadvertent admission in others. There is no economic miracle in Israel. There is a state supported economy that derives much of its initial wealth from stolen land and U.S. largesse economically and militarily.

opinion pieces and book reviews for The Palestine Chronicle. Miles' work is

also presented globally through other alternative websites and news