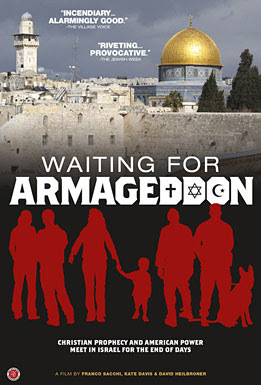 “Waiting for Armageddon” joins two other documentaries, “Jesus Camp” and “Unborn in the USA”, in lifting up the rock and showing the creepy, crawly things that have begun to play a larger and larger role in American politics since Ronald Reagan’s presidency. Indeed, there are grounds for dating the fundamentalist turn back to Jimmy Carter who was the country’s first “born again” President. After all, he was the first as well to open up an attack on the working class and poor at the time of his “malaise” speech, considered by some to be the opening salvo in a thirty year war on the welfare state.

Directed by Kate Davis, Franco Sacchi and David Heilbroner, this movie allows its bible-thumping principals to hoist themselves on their own petards. By simply sticking a microphone in front of their mouths and a camera on their universally Caucasian faces, the directors are spared the job of commenting on the madness, by any definition an exercise in superfluity.

We first meet James and Laura Begg, a Connecticut couple who are convinced that the “rapture” might come at any day and are doing everything they can to prepare for it, which mostly means sticking your nose in the bible rather than stocking canned goods. Mr. Bagg is an aeronautics engineer and his wife a software developer at the same military aircraft company. Their belief that Jesus Christ will return to earth and lead an army of archangels against the minions of Satan near Mount Megiddo in Israel, which will result in the death of all except the saved (Bill Maher, watch out—me too, I guess) is totally at odds with their professional training based to one extent or another on the laws of physics. Listening to them reminded me of Trotsky’s observations on the rise of Nazism:

Fascism has opened up the depths of society for politics. Today, not only in peasant homes but also in city skyscrapers, there lives alongside of the twentieth century the tenth or the thirteenth. A hundred million people use electricity and still believe in the magic power of signs and exorcisms. The Pope of Rome broadcasts over the radio about the miraculous transformation of water into wine. Movie stars go to mediums. Aviators who pilot miraculous mechanisms created by man’s genius wear amulets on their sweaters. What inexhaustible reserves they possess of darkness, ignorance, and savagery! Despair has raised them to their feet, fascism has given them a banner. Everything that should have been eliminated from the national organism in the form of cultural excrement in the course of the normal development of society has now come gushing out from the throat; capitalist society is puking up the undigested barbarism. Such is the psychology of National Socialism.

In addition to people like the Baggs, who hold down day jobs, we meet a gaggle of full-time professional sky pilots going from conference to conference at places that look like a Ramada Inn to lecture the faithful looking for clues about the return of Jesus Christ and how to get set to be lifted into the air with the rest of the saved. Looking at the girth on some of these believers, you wonder if they will ever be able to get off the ground.

One of the best known believers in rapture is John Hagee who is seen preaching to his followers:

There is a war between Islamofascism and freedom. There is a war between the culture of death and those who love life, liberty and the pursuit of happiness. It is a war WE MUST WIN. The Bible says that you, ladies and gentlemen, are the light of the world. May God anoint each of you and there can be a spiritual awakening in this country. That Christ will be seen as the answer. For there is no other name given among men whereby we might be saved.

Key to winning this war is support for the state of Israel, which in the twisted theology of more than 50 million Americans who believe in this stuff is a precondition for the return of Christ. Rightwing fundamentalists have raised 75 million dollars on behalf of Israel and tour the country all the time in the same way that people like me used to go to Nicaragua. They have tour guides showing them all the key sites where Jesus will lead his troops against Satan, while our tour guides used to take us to coffee farms or clinics. In the past, there were some who used to label me and other Marxists as millenarian but in our defense I can say that our beliefs were rooted in world history rather than fantasy.

Indeed, there is reason to believe that the Revelations of St. John, which is the foundation for the Rapture movement, would be harmless if Christianity remained a powerless sect just as it was at the time of its birth. It is only when you combine such beliefs with the reality of Cruise missiles, F-16’s and hydrogen bombs that things get dicey. The same thing is true of Judaism as well. Nobody felt particularly bothered by the book of Exodus with its savage narrative of death and destruction of Egyptians as long as Jews lived powerlessly in the shtetl.

Drawing upon critics of what amounts to a Christian Zionist movement like Chip Berlet and Mel White, a gay clergyman who once wrote speeches for Jerry Falwell and Billy Graham, we learn about its role in shoring up support for Zionist expansionism in the Middle East. Indeed, one might even make the case that this is much more of a factor than outfits like the American Jewish Congress since it uses the authority of the Christianity that is the religion of the nation’s most powerful policy-makers. Israel’s support from the evangelicals also represents the height of cynicism since it is well understood that people like Hagee believe that most Jews will not be on the winning side in the coming battle. One evangelical is cited as believing that only 144,000 Jews will be lifted up during Rapture. The rest will go to hell. Considering the personalities and psychology of the people featured in this movie, that’s fine by me.

Posted by Jay Rothermel at 8:45 PM