Just the encouragement he needs: satire from Товарищ Х 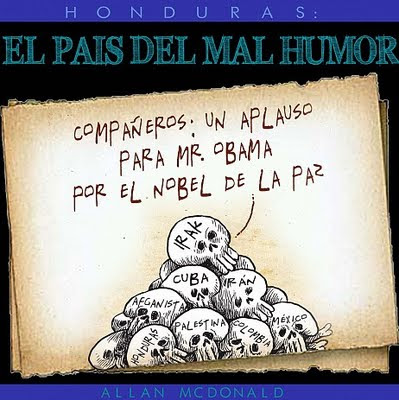 It has just been announced that President Barack Obama is to be awarded the Pulitzer Prize with Special Commendation and Wad-O-Cash for his forthcoming essay about to be titled Socialism Curse or Menace. Though the text is yet to be written, anonymous sources close to the President (M*****e, you know who you are), say that this treatise should put to rest all those rumours that Obama is drafting plans to hand over the reigns of the US economy to Mainstreeters and the less fortunate hangers-on that are here termed "rich all except for the money."

“Look,” says the honoree, “I am not about to nationalize the banks of this great country of ours, well not their profits and assets anyway, their risks and debts are another matter-- not about to nationalize them, despite what others may have to say about me. Uh-- you sir, yes the gentleman with the AR15 strapped to your back, no sir not you, the one with the grenade in one hand and the sign that says 'WATER THE LIBERTY TREE REGULARLY WITH THE BLOOD OF PRESIDENTS-- ESPECIALLY THE BLACK ONE' in the other hand. Yes sir, you. I'd like you to stop by my place later for a glass of beer.”

So, besides being a peace maker, a President and an astronaut, we are about to find, Obama has hidden talents. This is no intellectual lightweight-- he is a trim, energetic middleweight. His O-ness is a thinkster not afraid to take on the really big issues, the ones that kind of make your hair hurt when you cogitate on them, in spite of all his critics who say, “there are some things Man was never meant to know.” So it is that Obama explores, in great detail, the true nostrum for the world's ailing economy, i.e., The Green, You Should Pardon the Expression, Revolution. It is in this section of the codex that he reportedly extols The Cleveland Plan wherein toilets are confiscated and in their stead the sewer department sends each household a large, biodegradable, paper bag for which the home owner is billed the modest sum of $1 bazillion. The homeless, under this plan, would have their glass jars confiscated and just be required to hold it.

On a fashion note, costuming for the award ceremony has been announced, though pictures have not yet been released. The First Lady, in a bold austerity measure, will be stunning in the same “Black Widow” dress that she wore on the night of her husband's election. To better match her on this occasion, the President will forgo his customary black suit with matching tie for an Alexander Amosu designed original based on the Spider Man costume.
_______________________________________________
Товарищ Х is a political activist and composer who lives in Cleveland, Ohio.
Posted by Jay Rothermel at 11:23 PM